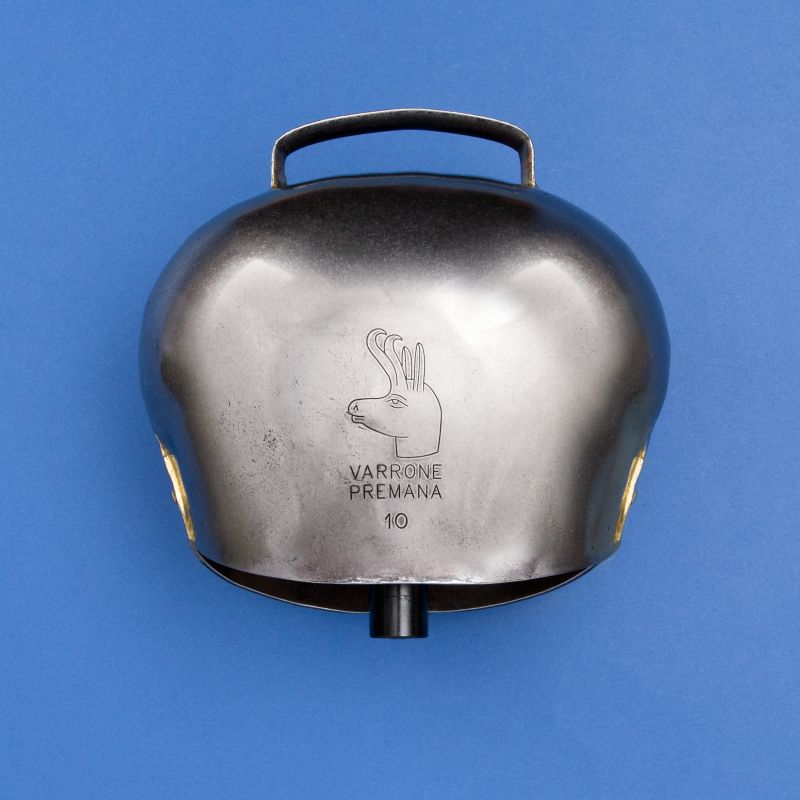 The practice of tying a bell to the neck of animals is ancient: the first evidence in the Alps dates back to Roman times.
The bell has always represented the sound landscape of the mountains. The cowbell has a practical utility: the rhythm of the tinkling provides essential information, allowing the shepherd to keep the cattle constantly under control. A slow, rhythmic sound marks the normal life condition of the group, while a rapid or irregular ringing can indicate danger.
But the importance of sonority does not end there: the bells are also a precious tool for orientation in case of fog and an antidote to solitude during the months of mountain pasture. The clear sound is able to break the long silence of the woods, allowing the shepherds to keep at “ear distance” and thus ensuring a continuous control over their own well-being.
In Italy, the largest producer of animal bells is C.A.M.P., a company founded in 1899 by Antonio Codega.
At the beginning C.A.M.P. made objects in wrought iron and for carpentry. Then, the Italian Army asked them to produce ice axes and crampons, they started specializing into outdoor equipment.
Today the company is a world leader for technical mountain equipment and safety at work, but, alongside continuous research and experimentation, it maintains a “timeless” production line dedicated to grazing bells, that they export to Europe and Japan.
The Varrone Premana bells are a tribute to the company founder who, at the beginning of the twentieth century, devoted his energy in finding the perfect sounds and shapes.
Working by hand with anvil and hammer, Codega looks for the exact relationship between the size and thickness of the bell to create a crystalline sound, capable of lasting over time. To test the quality, he carries out tests, ringing his bells on the opposite side of his village and thus understanding their intensity and clarity.
The first examples, in production since the 1920s, give life to the Valsassina line, a rectangular model that is mainly used for goats.
In 1933, the Chamonix line appeared . Round shaped, it is used for sheep. In the 40s the line Premana was born: with its harmonious shape, it is especially designed for cows.
For the shepherd the choice of a bell is done by ear: for the flock, in fact, it is necessary that each bell sounds slightly differently, in order to be able to recognize the animals individually and give life to a real orchestra. The harmony of the whole is the highest value pursued by shepherds and bell makers.
Currently the company, led by the fourth generation of the family, produces seven models, of 85 sizes, ranging from 2 to 27 cm, offering an extraordinary sound width.
The biggest models are used on the occasion of transhumance, when the cows, fully dressed up, parade like queens, transforming their passage into a moment of great collective ritual.